Amazon has plans to bring a facility to East Fishkill. Load Error The online shopping giant has proposed creating a 629,186-square-foot warehouse on roughly 124 acres of space that encompasses a portion of the former IBM west campus. The proposal calls for the creation of 500 full-time-equivalent jobs, though John DiCola, […]

Amazon has plans to bring a facility to East Fishkill.

The online shopping giant has proposed creating a 629,186-square-foot warehouse on roughly 124 acres of space that encompasses a portion of the former IBM west campus.

The proposal calls for the creation of 500 full-time-equivalent jobs, though John DiCola, a partner with the development company working with Amazon, called that estimate conservative.

Rather than a fulfillment center, the warehouse would be a receiving center that would take products in from manufacturers and redistribute them to fulfillment centers. That, Dutchess County officials believe, will allow for more consistent employment and less dependent on whims of seasonal shopping trends.

“It’s good news at a time when Dutchess County and regional workers need good news,” County Executive Marc Molinaro said, referencing the economic fallout of the COVID-19 pandemic. “It’s job growth at a time when we need it the most.”

The project would be a $135 million investment in the region, though Amazon is still considering other locations and final approvals are needed locally.

The project has been in discussion in East Fishkill town and planning board meetings for months under the name “Project Redtail,” in which the Bluewater Property Group has been proposing the facility. During a Nov. 5 town board meeting, DiCola said the company had a tenant for the space that was “a household name, a Fortune 500 company,” which also has a 1 million-square-foot facility in the works in Montgomery.

© Patrick Oehler/Poughkeepsie Journal
One of the vacant buildings on the former IBM West Campus in East Fishkill on November 17, 2020.


During a Nov. 11 Dutchess County Industrial Development Agency Board meeting, through which Amazon is petitioning for a Pilot in Lieu of Taxes agreement, DiCola confirmed the connection between Bluewater and Amazon.

The town has a special board meeting scheduled for Dec. 3 to discuss the project and its impact on traffic, East Fishkill Town Supervisor Nicholas D’Alessandro said during the IDA meeting. D’Alessandro did not respond to Journal inquiries Tuesday.

January has been proposed for when construction may begin, with the project expected to be completed by June 2022. The IDA board unanimously voted in favor of the preliminary project, advancing the project to a public hearing and a final vote. The next IDA meeting is scheduled for Dec. 9, though the date for the public hearing has yet to be set.

“Our confidence at this point is like 98%,” said Assistant County Executive Ron Hicks.

The county noted the PILOT agreement would be performance-based and dependent on the company fulfilling its proposed job creation totals.

During the Nov. 5 town meeting, Bluewater representatives answered town board members’ questions regarding the impact on traffic, pollution and on the neighboring John Jay High School.

© Adam Cairns/Columbus Dispatch
A complex system of conveyor belts transports packages around the Amazon distribution center in Etna, Ohio on Friday, Nov. 6, 2020. The facility, which employees 2,500, can distribute hundreds of thousands of packages a day.


DiCola said, “One of the first things we noticed,” he said of his company and Amazon, were that there would not be “any negative impacts,” due to the already-secluded nature of the former IBM campus. The company walked the board through research that included how drainage at the site would work, as well as an acoustics study. The positioning of the school in relation to the elevation of the prospective Amazon campus and I-84 led the company to conclude there would be no excess sound concerns, and the company plans to plant more trees in-between its property and the school.

He said the companies anticipate all its traffic utilizing the property’s exit to Lime Kiln Road, which connects directly to I-84.

“By and large it is going to be using just the I-84 connection,” DiCola said, emphasizing the importance of the Interstate. “The site does connect up with Route 52; that is, for us, for this project, is considered very secondary. We do not expect to contribute a lot of traffic onto that road.”

The Amazon facility is proposed for the portion of the campus that sits south of the long-paused Sports Kingdome project, and west of John Jay, split by Auditorium Drive. Converting that to a town road to mitigate traffic is one option the town is considering.

“Blue Water has indicated that they are willing to assist with this cost with the town,” D’Alessandro said at the IDA meeting. “So, we’re trying to put all the numbers together and see there’s other projects as well going on in that corridor. So, the town has to do a little more research on how it’s going to affect each project and what the cost will be associated to each project.”

© Patrick Oehler/Poughkeepsie Journal
A site inside the former IBM West Campus which is slated to become an Amazon distribution center in East Fishkill on November 17, 2020.


In addition to the facility, the Amazon campus would include 1,000 employee parking spaces, 700 trailer spaces and 132 loading docks. Construction costs are estimated at $90 million.

It would be the second Amazon warehouse project in the Hudson Valley, with the distribution center project in Montgomery already underway. This project would conversely be what the company is calling a cross-stock or receiving center. Amazon is able to use this warehouse to streamline its supply chain efforts with minimal storage but also allows for amazon to take bulk shipments of inventory and receive it at this location.

“The goods that will be coming to this project are coming from an existing facility within their logistics network and then when it leaves here it’s also going to another facility within their logistics network,” he told the board. “From this facility, there is no local deliveries. And really what is important is that main connection to the highway.”

The proposal to the IDA indicates the construction project would create 200 jobs, followed by 500 full-time-equivalent jobs created at the facility over two years. However, DiCola said the facility would actually need 729 employees “per shift,” which would be a combination of full and part time.

Brad Riggs, senior manager on Amazon’s Economic Development Group covering the northeast and Mid-Atlantic expansion efforts like the proposed project in East Fishkill, said at the IDA meeting, “all of our full-time employees again have industry leading wages, starting in at least $15 an hour,” Riggs said. “That’s throughout North America, in the northeast and in New York, we would anticipate that being slightly higher. Additionally, there’s the salary position, starting At least $60,000 a year.”

These positions come with benefits day one including medical, dental, vision, 401K and life insurance.

© Patrick Oehler/Poughkeepsie Journal
One of the vacant buildings on the former IBM West Campus in East Fishkill on November 17, 2020.


What is included in the PILOT

Sarah Lee, IDA Executive Director and Chief Executive Officer of Think Dutchess, said the current assessed value of the property is $5.2 million, and East Fishkill is the lead agency on this project. In 2020, $154,000 was collected in property tax revenue.

The new assessed value is projected to be another $95 million, about an $89 million increase. The 15-year PILOT would create an estimate real property tax exemption of roughly $14.3 million for the duration of the agreement.

The first year of the pilot payment is estimated to be $1.2 million. For context, on the first year after the PILOT expires, property taxes would increase to roughly $3.7 million, according to the application. Lee added that Amazon is asking for a mortgage tax abatement, a property tax exemption and a sales tax exemption.

According to the IDA documents, “The applicant has stated that the project would not be feasible without the assistance of the IDA and that IDA assistance is a material factor for Amazon’s decision to commit to the East Fishkill location.” The application also states the project is supported by the town and the Wappingers Central School District.

Amazon estimates over 15 years and region would enjoy direct or indirect benefits totaling more than $544 million.

In a statement, Lee, called it “rewarding … to develop an attractive incentive package to encourage the company to make an investment in Dutchess County. The significant increase in employment will help re-invigorate the county’s economy and have a positive impact on local business.”

© Patrick Oehler/Poughkeepsie Journal
A sign on Route 52 for the entrance to the former IBM West Campus in East Fishkill on November 17, 2020.

The southwestern corner of IBM’s former campus has been vacant for years, even as the eastern half was redeveloped as IPark, which features a variety of smaller businesses, and the northwestern corner has long been proposed as the site of a massive recreational sports complex.

But, Amazon finding its way to the property, “didn’t happen by mistake,” Hicks said. “They didn’t find us. This is all part of the plan the County Executive set forth years ago.”

That strategy, he said, included preparing strategies to help companies move in easily, working with town governments and within zoning requirements. Molinaro said the Town of East Fishkill was a “tremendous partner in making this property attractive.” The town in 2014 passed a law specifically to encourage the redevelopment of the site with a special permit.

Hicks said the county reached out to Bluewater roughly two years ago to get them to see how the property may suit their needs.

“I don’t believe they’ve ever had such an experience in the northeast,” he said, referring to the benefits of the campus.

Molinaro noted in addition to working with the town, the county works with regulatory agencies to make the transition for the prospective business smooth.

Of the Amazon center, he said, “It’s the kind of investment that makes sense on this property.”

Thu Nov 19 , 2020
U.S. Rep. Ilhan Omar is chopping ties with her husband’s consulting business after profitable her bid for reelection, expressing she wants to make sure her supporters feel you can find no perceived concern ByThe Connected Press November 17, 2020, 12:28 AM • 2 min read Share to FbShare to TwitterEmail […] 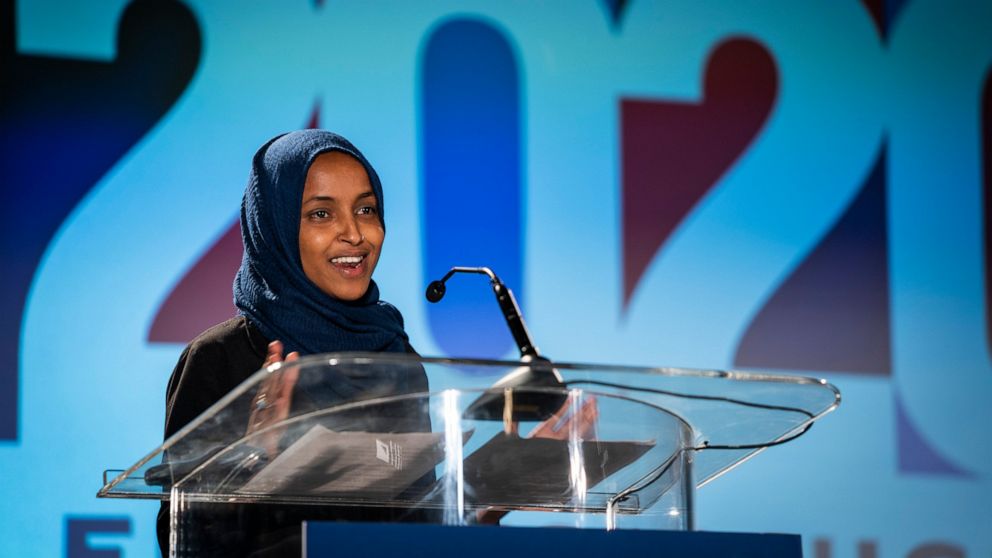